Alright, so remember how last time I said lampas wasn’t happening and it was just going to be three way iridescent silk? I lied. We’re at plain iridescent silk.

Well you see, tension is a pain in the butt to get correct with silk. For some reason the three way iridescent silk was plagued with tension issues. The right most 3 inches (7ish cm for my metric folks) got progressively looser as I unwound more warp. This meant I was frustrated and taking super long to weave. I finally gave up, cut the three way iridescent off, and retied the warp to adjust the tension. This meant that I no longer had time to fiddle with two wefts.

Yes I have ordered the silk to do a more dramatic three way iridescent piece as my next project when I don’t have a tight deadline.

Let’s back up a bit and start with why I’m weaving iridescent fabric in the first place.

How do we know it’s period? We have paintings implying iridescence in fabric, like this image from the Visconti Hours:

See the woman on the right in pink and yellow? The way it was painted implies a color shift in the fabric itself, and yellow and pink will provide iridescence if woven together. I’ve yet to find a source for how to weave it in period, however something like this would more than likely have been a guild secret so I don’t have high hopes for finding documentation like that. I’m just going to continue to muddle through figuring it out.

So how do you weave something iridescent?

Iridescence is just playing with color theory and string. You need at least two colors, be smarter than me and plan on only two for your first project. You’re welcome. Your colors should be similar color saturation and from different points on the color wheel. If your colors are too different in saturation the lighter color will get lost and if they’re too close on the color wheel then they’ll just look muddy. All iridescent fabric involves two or more contrasting colors, not all fabric with two or more colors will create iridescence.

You want to use a looser sett so that the threads have room to move. If they’re stiff then you won’t get the pockets and folds that highlight one color over the other. So no taffeta or tightly packed twills here folks. Iridescence is all about drape.

You want smooth thread, the smoother the better. Silk is perfect, crochet cotton is lovely, wool is possible but tricky. Smooth and shiny thread helps create the shine we associate with iridescence, and helps keep the sharp lines between colors needed in order for the magic to work. Fuzzy yarn doesn’t allow that to happen.

You want fine thread. The finest you can stand to work with. The more threads you can pack into an inch or cm the smoother the transition between colors will be and the more impressive the effect. You can make something iridescent with heavy yarns, technically. If  you follow all the other rules you can weave something with a color shift, but it’ll be clumsy and read more like stripes than magic. Still technically iridescent! And a wonderful way to learn without the time investment (so.much.time) of itty bitty fiddly silk.

For this sample I used 60/2 silk in Red and Diva Blue from Webs. I could warp it as dense as 55epi (27.5epcm), but to get the drape I needed I kept it at a some what gauzy 40epi average. Final piece ended up being 14×33, which is perfect for me to have the shiniest most obnoxious viking apron panel ever. Which almost makes up for not having the veil I wanted. 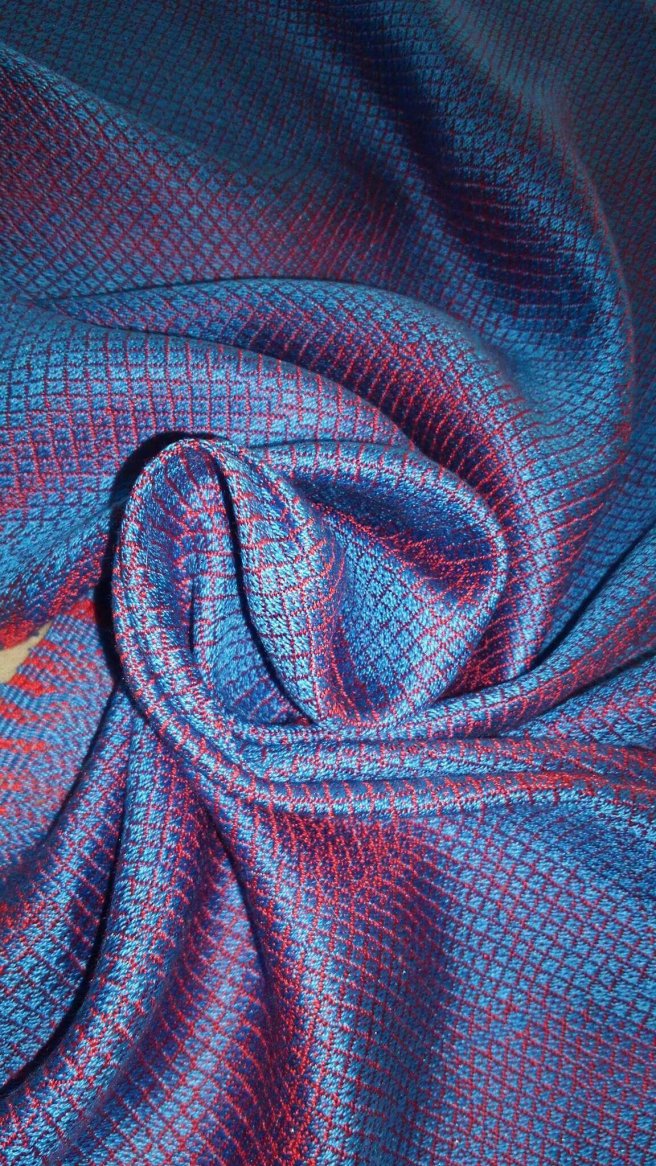