So my last post (way back in mid-April, remember?) I talked about weaving silk. I laid out all my glorious plan for how this was going to go and how beautiful the finished project was going to be, ect. Well…

I made my apprentice sister a french hood. Because I love her very much and she needed a hat just as glorious as the fancy dress she recently acquired AND something worthy of sitting atop her awesomeness. I think I came close and I really hope she likes it.

Total hours: sweet merciful Loki. I averaged 1in an hour weaving time and spent about 30 hours total warping. So 88 hours weaving/warping total. Sewing took about 10 hours. Knotting and applying the pearls took about 6 hours all told. Patterning/cutting materials/stiffening the linen was about 4-5 hours actual work. Let’s say 5, I tend to under state my labor.

For a hat. A really awesome hat.

The design for this piece taken from a portrait of Anne Boleyn showing a black French hood trimmed in pearls and edged with an orangey red pleated ribbon.  I have chosen to recreate this hood in handwoven black silk taffeta, red silk satin ribbon, and cultured pearls. 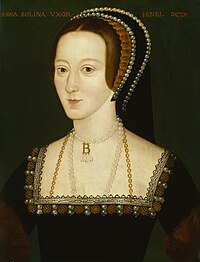 We’ve found cloth ranging from 15 to 100 epi per Textiles and Clothing 1150-1450. In an effort to recreate this I aimed for 50 epi when weaving the covering, lining, veil, and ribbon. I have woven the covering, lining, and veil in a simple tabby weave to produce taffeta per  “Anatomy of the Abuses in England” (1583) by Phillip Stubbes:

… on toppe of these stately turrets (I meane their goodly heads wherin is more vanitie than true Philosophie now and than) stand their other capitall ornaments, as french hood, hat, cappe, kercher, and suche like; wheof some be of veluet, some of taffatie, some (but few) of woll, some of this fashion, some of that, and some of this color, some of that, according to the variable fantasies of their serpentine minds. And to such escesse is it growen, as every artifices wife (almost) wil not stick to goe in her hat of Veluet everye day, every marchants wyfe and meane Gentlewomen in her french-hood, and everye poore Cottagers Daughter in her taffatie hat, or els of woll at least, wel lined with silk, veluet or taffatie. …

The silk taffeta on the shell of the paste and crescent came out to a finished thread density of 54epi. The ribbon is an average of 60epi,  and the veil was woven at 35-40epi to allow for a lighter fabric.

A simple weave, and coarser thread count, would keep costs down in creation of this piece as well as speed production. As today, fashion follows the rich, and it is not out of the realm of possibility that a gentlewoman would commission a hood in the style of one worn by the queen. Therefore it would behoove an enterprising merchant to be able to produce one quickly and comparably cheaply.

The stiffened paste and crescent that forms the center shape of the hood is composed of three layers of heavy linen canvas.  These layers are edged in 14 gauge jewelry wire to help maintain the shape of the hood and support the weight of the veil. Though we have no surviving extant French Hoods we have found wire shaping for English Gable Hoods, the direct predecessor of the French Hood, making it safe to assume French Hoods would have been constructed in a similar fashion.

The French Hood: What it is and is not Lady Alliette Delecourt mka Irina Lubomirska

Anatomy of the Abuses in England in Shakespeare’s Youth A.D 1583 Phillip Stubbes.

One thought on “That… did not go as expected.”